Ethereum is More Than DeFi - The Daily Gwei #23

Exploring the other, less talked about apps on Ethereum.

DeFi on Ethereum gets a lot of attention - and understandable so - but there are many other apps on Ethereum that are either adjacent to DeFi or don’t have much to do with “finance” as it’s traditionally defined (lending, derivatives, payments etc). While these apps aren’t as popular as DeFi, they still have sizable communities who are dedicated and passionate. Let’s explore.

The Graph published a piece yesterday titled ‘1 Billion Monthly Queries’ which breaks down where the Ethereum blockchain queries are coming from by “vertical” aka application sector. Unsurprisingly, DeFi came in at a 76% share of the overall pie with the other 24% being shared between entertainment (arts, collectibles, gaming), software computing platforms, DAOs, marketplaces and other. 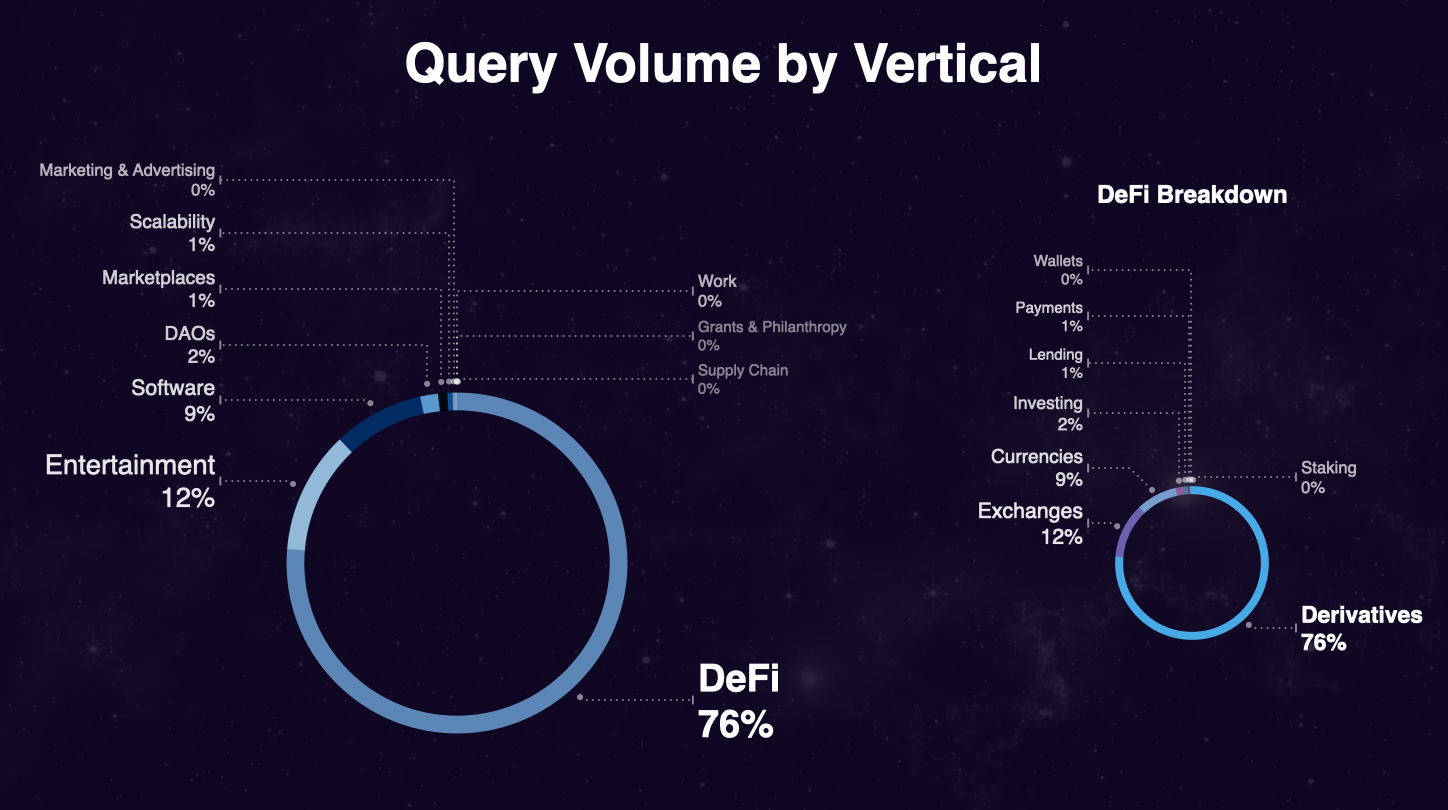 This speaks to the fact that Ethereum is not locked down to just one use-case or vertical. Just because most of the community and users are playing in the DeFi sandbox, it doesn’t mean that people can’t play in other sandboxes. Though it’s worth noting that DeFi usage is currently pricing out a lot of the other use-cases due to high gas fees - especially things like deploying DAOs (which can cost hundreds of dollars now) and trading of crypto gaming items or digital art (NFTs) as these can be low value (<$1) which makes trading these assets economically unfeasible on Ethereum today.

Some of these apps will move to layer 2 or sidechains while others will simply die out over time but might reemerge when Ethereum has better scalability (in eth1 at layer 2 and/or on eth2 with sharding). Though, it’s difficult to make any sort of assumptions on what this would look like in eth2 because we don’t have a totally clear picture of what sharding is going to look like just yet.

In saying all of that, you could make the argument that trading NFTs and deploying DAOs are also “DeFi” in that they touch financial use-cases. Exchanging NFTs obviously falls into the “trading” category of DeFi while many DAOs (such as Moloch and MetaCartel) are essentially venture funds. Though I think most people would consider “DeFi” to be apps like Maker, Compound, Uniswap etc and would rather keep these apps distinct from the “adjacent” financial-ish apps on Ethereum.

In addition to all of these apps, we also have “web3” products and services that have traditionally struggled to gain traction on Ethereum due to a myriad of factors (scaling, lack of product/market fit, too early etc). These apps do include things like DAOs but they also include apps such as decentralized social media (Peepeth, Cent), token curated registries (High Priests) and decentralized messaging platforms like Status. These apps have traditionally been adversely impacted by Ethereum’s lack of scalability and the high gas fees has only exacerbated the issues. Some of these apps have even chosen to take some core features off-chain which sacrifices decentralization in favor of usability.

If there’s one area where I think “Ethereum killers” (competitor chains) stand a chance at carving out a niche, it would have to be the web3 applications.

I think this for 3 reasons:

I still think the competitors only have a short window to capitalize on this gap that Ethereum has left. With layer 2 solutions coming online rapidly I doubt the scalability and fee issues will be plaguing these web3 apps for very much longer and I hope to see them start to gain serious traction on Ethereum.

Have a great day everyone,
Anthony Sassano

All information presented above is for educational purposes only and should not be taken as investment advice.

For your security, we need to re-authenticate you.